What are extreme risk Orders?

In most instances of gun violence, the individual showed signs that they were at risk of hurting themselves or others. In the aftermath of a shooting incident, we often hear stories from friends or family members about signs the shooter exhibited. That’s because there are often warning signs, which some call “red flags”, prior to these acts of violence, and knowing them can save lives. Sandy Hook Promise has evidence-based programs to teach people to Know the Signs and how to act to help prevent gun violence. 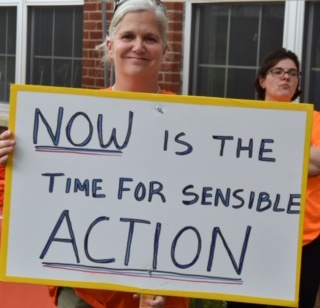 How do ERPOs Work?

ERPOs can be issued in two different ways to prevent violence:

Recent research found that for every 10 to 20 ERPOs filed, at least one life is saved from suicide.1

Are ERPOs the same as “red flag” laws?

Red flag laws are one name often given to ERPOs. Sandy Hook Promise avoids the term “red flag” because we believe all caution must be taken to ensure that these laws are not used to further perpetuate stigma or marginalize any person or community. The intent of these laws is to reduce risk and protect people in crisis from harming themselves or others. Therefore, members of the gun violence prevention movement call these laws “extreme risk laws” or “extreme risk protection orders,” instead of “red flag laws.”

What happens after an ERPO is issued?

After an ERPO is issued, law enforcement removes any existing firearms from the respondent’s possession and updates the background check system to temporarily prohibit purchases for the duration of the ERPO. Once the ERPO is terminated, the respondent has the right to have their firearms returned and the background check system is updated to signal the end of the ERPO.

What kind of evidence is needed?

When deciding to grant an ERPO, judges can consider, among other things: recent acts or threats of violence against self or others, patterns of violence over the past year, prior convictions of domestic violence, prior unlawful or reckless use of a firearm and previous violations of protection orders or no contact orders.2

Which States Have ERPO Laws?

Studies have shown that ERPO laws are effective in preventing many forms of gun violence. A recent study found that for every 10-20 ERPOs filed, at least one life is saved from suicide.3 In Connecticut and Indiana, versions of extreme risk protection laws have been shown to reduce firearm suicide rates by 14% and 7.5%  respectively.4 Between 2016-2018, California saw 21 cases in which the use of an ERPO helped prevent a mass shooting.5 In Maryland, 302 ERPO petitions were filed in the first three months after an ERPO law was put into effect in October of 2018.  Just under half of those cases (148) resulted in 1-year ERPOs being issued and in four of those cases, the gun owners posed a “significant threats” to schools.6 Sandy Hook Promise supports legislation that enables families to alert law enforcement to potentially dangerous situations and gives law enforcement the tools and authority they need to remove firearms in the interest of public safety. Congress can take action at the federal level to incentivize state passage of these lifesaving laws and to provide funding to ensure these laws are implemented effectively.

Is There Support For ERPOs (AKA “red Flag”) Laws?

Tell Your Member of Congress to Co-sponsor the federal ERPO Bill.

2. The Educational Fund to Stop Gun Violence. (2016, September). Extreme Risk Protection Orders: An Opportunity to Save Lives in Washington. Retrieved from http://efsgv.org/wp-content/uploads/2016/09/FINAL-ERPO-complete-091916-1.pdf